By: Filmymonkey Team
Updated: 19 Sep 2019 07:42 PM
Sanjay Kapoor's wife and Shanaya Kapoor's mom Maheep Kapoor has been one solid source of family pictures and she keeps treating fans with the throwback gems of the entire family including late Sridevi, her daughters and the Kapoor khan-daan. Maheep just took to Instagram to share yet another picture from a while back when Suhana Khan was little. Suhana is the childhood bestie of Shanaya Kapoor and Ananya Panday. Ananya, the daughter of Chunky Pandey and Bhavna Pandey, made her debut with 'Student of The Year 2' opposite Tiger Shroff and Tara Sutaria and she will next be seen in 'Pati Patni Aur Woh'(with Kartik Aaryan and Bhumi Pednekar) and 'Khaali Peeli'(with Ishaan Khatter). Suhana recently enrolled at the New York University to pursue film studies and Shanaya's latest photoshoot pictures took internet by storm. The 3 popular star daughters pose together with their moms in this picture but the fans are posting nasty comments on Suhana's look in the photo.

While Ananya and Shanaya are getting praised in this picture, Suhana is receiving a lot of ugly comments owing to how she looks standing beside her mom Gauri Khan. Some fans also blame Maheep asking her why she posts pictures that feature her daughter Shanaya looking pretty while Suhana does not.

Here's how the fans are reacting to the pictures: 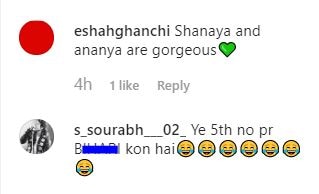 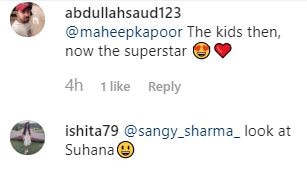 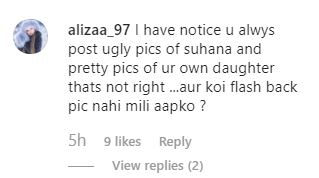 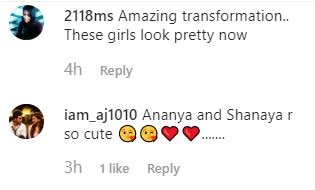 This isn't the first time SRK's princess is facing the trolling. The star kid has been trolled multiple times in the past too.