By: teamfm
Updated: 11 Jun 2016 04:04 PM
Bollywood actress Priyanka Chopra, who is throwing surprises one after another in her international journey, has now featured in a video with the likes of Jennifer Lopez and Cristiano Ronaldo. What's more, the song is by Enrique Iglesias. 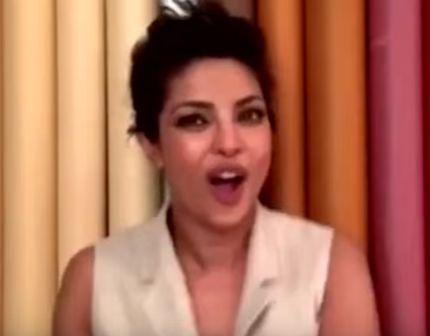 The song, titled "Don't you need somebody", has been primarily sung by "Hero" singer Iglesias, with bits of it crooned by R City, Serayah and Shaggy. Priyanka, a former Miss World title holder, is pleasantly not in a a blink-and-you-miss appearance. Instead, she features in a number of frames as she is seen grooving to and lip syncing to the number.

The video also features international celebrities like Akon, Mila Jovovich, Ryan Seacrest, Mesut Özil, Lopez and Ronaldo among others. Released on YouTube on Friday, the video has Priyanka in a hair updo and a beige-hued jumpsuit. Her wine coloured lipstick stands out.

Also: When Vishal Shekhar THREATENED Priyanka Chopra over a song!

Priyanka's journey on foreign shores first began when she released her English single "In my city". She launched two more tracks before landing a lead role in American TV show "Quantico", and now she has even shot for the "Baywatch" movie with Dwayne Johnson.