By: John Leicester
Updated: 21 Aug 2016 03:49 PM
RIO DE JANEIRO: As Caster Semenya stood on the Olympic medal podium, the gold around her neck, the South African anthem playing, one was reminded of another opinion-changing person from her country: Nelson Mandela.


Semenya doesn't have the anti-apartheid leader's oratory gifts. But like the father of modern South Africa who died in 2013, she is teaching the world — not just sport, but the wider world that is moved by it — about tolerance, about courage and about judging people not by how they look, but by what they do, how they do it and how they conduct themselves.

Semenya does that by running. Running beautifully.

Semenya's story shouldn't be any more complex than a celebration of the athleticism she displayed in winning the 800 meters at the Rio Games.

But, of course, it is complex.

This would usually the place for a paragraph about gender, about testosterone, about fairness or otherwise, about science and pseudo-science and plain old BS. In short, a paragraph that could not even begin to do justice to the injustice, the questions, the whispers, the doubts, the finger-pointing, the name-calling and Byzantine cruelty that Semenya has had to wade through since she announced herself to the world by winning the 800-meter world title as an 18-year-old in 2009. 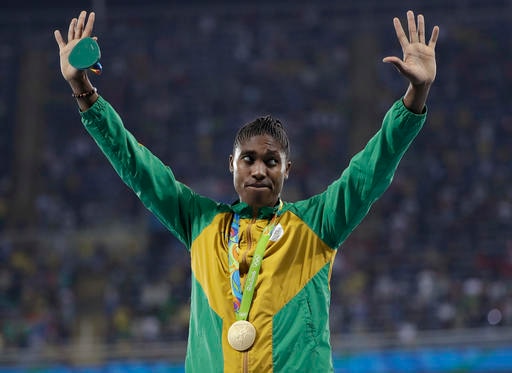 If, at this point, you don't know what we're talking about, then lucky you, because it hasn't been pretty. Look it up, if you must.

The short version is this: Like Mandela, she has risen above it all. Her dignity, like his, is both her shield and her weapon. He forced white South Africans to look at themselves. Eventually, they could no longer stomach what they saw. Semenya, too, has become a mirror: Those who judge her only by her looks, who have called her a half-man, or whatever, will eventually get sick of their own ugliness, their lack of compassion and basic humanity. Like Mandela, she has had to learn how to tune hatred out.

Perhaps the best bit about her Olympic gold was how it seemed, almost immediately, to bring her out of her shell. She has, understandably, always run from excruciatingly personal and intrusive questions about whether she was born with internal testes, no uterus and has high levels of testosterone — in short, absurd questions about matters that are nobody's business but her own.

But she isn't running any more. In Semenya, sport long thought it had a problem. But in the belly of Rio'sOlympic Stadium, sports instead got a new leader who preaches unity where, for too long in her case, there has been nothing but discord.

"Here I am," she told a large group of reporters, after avoiding questions all week. "I just want to be the best I can be."

"You just need to lead by example," she added. "Maybe, if people they just unite, it can be a great world." 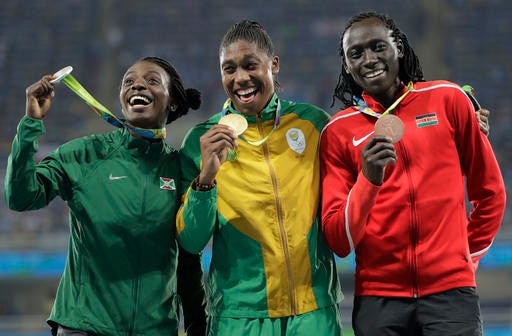 Slowly, Semenya seems to be winning over her rivals, too. They have mostly learned to keep their thoughts to themselves about whether their sport needs rules to somehow dial back the competitive advantage they perceive women like Semenya to have. Some of them aren't happy. Semenya's winning time of 1 minute, 55.28 seconds was one of the top 20 times ever in the two-lap race. Rivals predicted that she would blow away the field. And she did. Burundi's Francine Niyonsaba was more than one second behind in 1:56.49 for silver and Kenya's Margaret Wambui ran 1:56.89 for bronze.

But this night, Semenya's night, was neither the time nor place for rivals to get into the debate about the need or otherwise for testosterone-limiting rules. That will soon be back in the hands of the Court of Arbitration for Sport. It suspended the rules last year, judging that they were based on uncertain science. The International Association of Athletics Federations will be going back to the CAS in the next year to try to change its mind.

But is she breaking barriers.

She said one of the first things she wanted to do was call her wife, Violet.

"I still have to make a long call, obviously, my wife is waiting," she said.

After all Semenya has been through, the freedom she expressed on and off the Olympic track felt like a message to the world.

All it must do now is listen.

John Leicester is an international sports columnist for The Associated Press