By: PTI
Updated: 04 Apr 2016 07:27 PM
Kolkata: India's star batsman Virat Kohli has maintained his number one position in the ICC T20 batsmen rankings and so have India in the team charts after the conclusion of the World T20.

West Indies, who won the World T20 title here last night, have number-one ranked India firmly within their sights after they became the only side to win the tournament twice.

The West Indies defeated 2010 winner England by four wickets in front of a packed Eden Gardens, and have consequently moved ahead of New Zealand in second place. The West Indies are now on 125 points, one point behind India who lost to the eventual champion in Mumbai in the second semi-final on Thursday.

After finishing as the second best side in the tournament, England are now fourth after swapping places with South Africa. New Zealand, who lost to England in the first semi-final in Delhi on Wednesday, have retained their third place at 120 points. In the batsmen rankings, Virat Kohli has comfortably defended his number-one position. India’s top-order batsman, who was adjudged player of the tournament, leads Australia’s second-ranked Aaron Finch by 86 points. Kohli had entered the home competition leading Finch by 24 points.

England’s Joe Root, who finished as the third leading run-getter behind Tamim Iqbal and Kohli with 249 runs, has broken into the top five for the first time in his career. Root scored 27 not out in the semi-final and 54 in the final, for which he has been rewarded with a jump seven places that has now put him in fourth position.

Marlon Samuels, who won the player of the final award, has also returned to the top 20 in 18th position. The top-order batsman scored eight in the semi-final and 85 not out in the final, which has helped him rise five places to share the position with South Africa’s Quinton de Kock.

England’s Jos Buttler is the other batsman inside the top 25 to improve his ranking. The wicketkeeper/batsman is now in 24th spot after moving up three places. 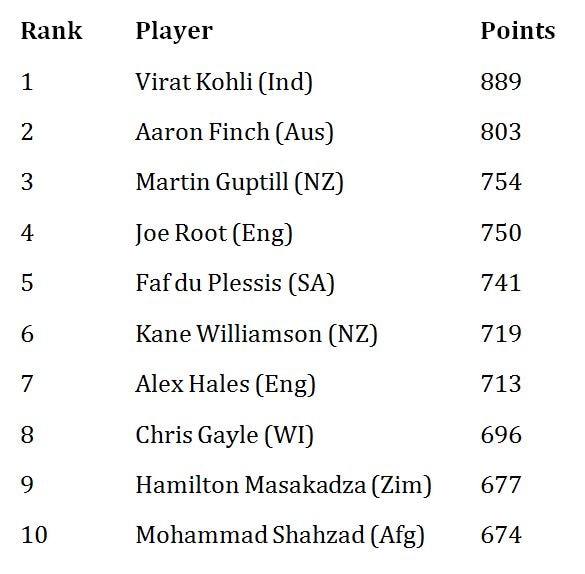 Amongst the bowlers, India’s pace duo of Jasprit Bumrah and Ashish Nehra have achieved career-best rankings.

Bumrah has vaulted six places to seventh, while Nehra has climbed five places and is now in 11th position.

West Indies’ Samuel Badree is the number-one ranked bowler and he leads fellow wrist-spinner Imran Tahir of South Africa by 50 points, while India’s Ravichandaran Ashwin is in third position, another 28 points behind.

There is no change in the top five of the all-rounders’ list, which is headed by a retired Shane Watson. He is followed by Shakib Al Hasan of Bangladesh, Pakistan’s Shahid Afridi, Australia’s Glenn Maxwell and West Indies’ Marlon Samuels. 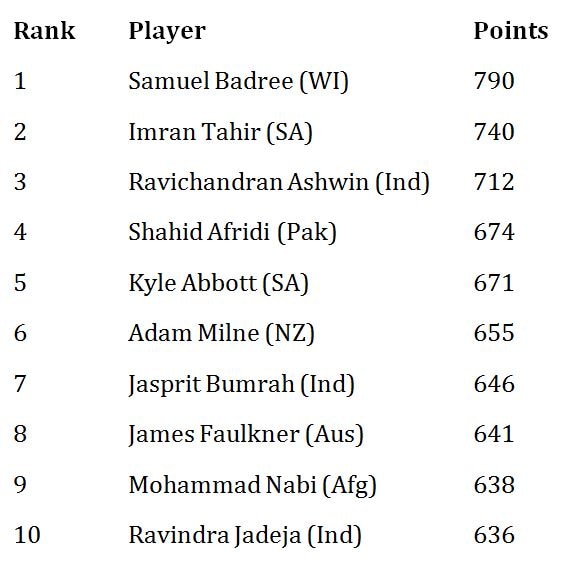