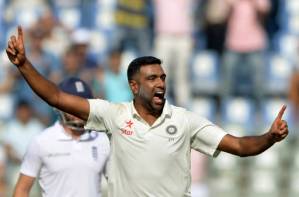 Mumbai: Keaton Jennings impressed on his debut for England with a century but off-spinner Ravichandran Ashwin brought India back with a late three-wicket burst on the opening day of the fourth cricket Test, here today.

England were going strong by taking tea at 196 for two but India reduced the visitors to 288 for five at stumps as Ashwin removed Moeen Ali (50) and Jennings (112) in space of three balls and later got rid of Jonny Bairstow (14).

Ben Stokes (25) and Jos Buttler (18) were the unbeaten batsmen at close after an unfinished stand of 39 on a track that would be difficult to negotiate with passage of time.

Post-tea, Ashwin made the ball talk by extracting turn and bounce from the Wankhede Stadium track and ended with figures of four for 75. England skipper Alastair Cook (46) was dismissed by left-arm spinner Ravindra Jadeja (1/60) in the opening session.

The tourists are 0-2 down in the series and need to win this game to keep it alive for the fifth and final Test, scheduled in Chennai from December 16.

The former South Africa U-19 captain, Jennings, showed no nerves as he became the 19th batsman playing for England to make a century on debut against India. It was also the fifth time that a batsman achieved the feat against the hosts since 2010.

Jennings, who had come in as replacement for the injured teenaged batsman Haseeb Hameed after the third game, took full advantage of two close shaves early on, including a dropped catch when he had not even opened his account. But after the early jitters, Jennings took to his natural game when he came down the track multiple times to smother the spin.

Jennings had played some audacious reverse sweeps too, including one when on the cusp of his landmark, to reach the hundred in 186 balls and laced with 12 fours.

He added 99 runs for the first wicket with captain Cook, 37 for the second with Root and 94 for the third with Ali.

Joe Root was sent back by Ashwin through a smart catch at slip by home team captain Virat Kohli after Cook had been stumped by Parthiv Patel off Jadeja.

The tourists looked well-poised for a big score at the end of session two when Ashwin, who bowled far better after switching ends, clipped the high-flying England’s wings by packing off Ali.

Ali top-edged a sweep and was caught at mid-wicket soon after completing his half-century in 104 balls. Two balls later, Jennings, son of renowned coach Ray, was caught brilliantly by a diving Cheteshwar Pujara at gully.

More trouble followed for England when Bairstow, stonewalling with Stokes, was tempted into playing a sweep and top-edged to long leg as the visitors slumped to 249 for five.

It left the sixth wicket pair of Stokes and Buttler to do the resurrection job till close of play.