By: Team Fm
Updated: 15 Nov 2017 02:40 PM
After dating for more an year, TV's cute couple Aashka Goradia & beau Brent Goble got engaged in an Indian traditional ceremony in July this year where the 'Naagin' actress went on her knees and proposed him for marriage. 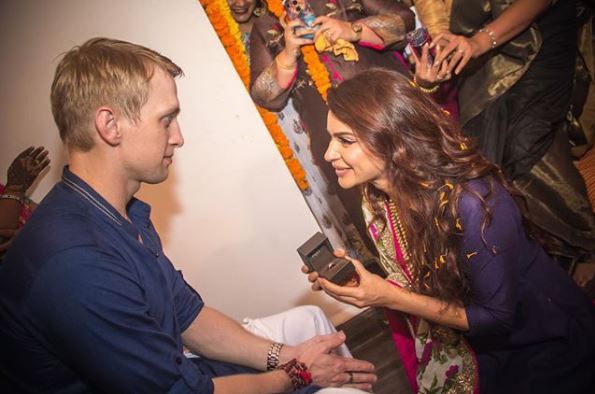 Now, the 'Nach Baliye 8' couple is all set to tie the knot in December this year. Before tying the knot, the couple has now shot for a pre-wedding music video titled 'Woh Chilman Se'. The couple's music video which showcases the ups and downs of a relationship.

Aashka & Brent are looking great together and their chemistry will surely make you go aww!

‘Nach Baliye 8’ couples Aashka-Brent & Bharti-Haarsh all set to get MARRIED on the SAME DAY!

Speaking about their December wedding, the couple will tie the knot with each other not once but twice. Aashka and Brent have decided to not only have a traditional Indian wedding but the duo will also be having a White wedding. Reportedlty, the fairy tale wedding will take place in Ahmedabad since it happens to be Aashka's hometown.

The couple's wedding festivities will begin from 1st December 2017 and will go on for three days, , concluding on December 3 with the traditional Indian wedding.