Bigg Boss 11: Ravi Dubey REACTS on MISBEHAVIOR with Hina Khan in the mall; calls it DISGUSTING!

By: Team Fm
Updated: 08 Jan 2018 06:00 PM
Popular reality show 'Bigg Boss 11' started with a total of 18 contestants in October with much fanfare and expectations. The show is now only a week away from its finale with only 5 contestants remaining in the house namely - Hina Khan, Vikas Gupta, Shilpa Shinde, Puneesh Sharma and Akash Dadlani. 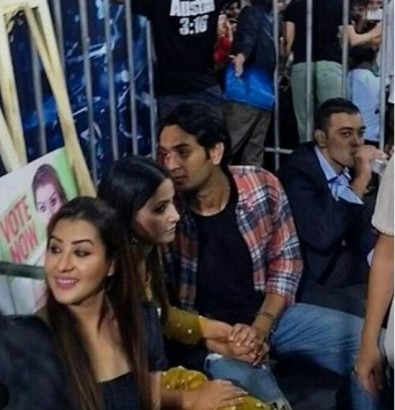 The makers are introducing various twists & turns to make the show more entertaining. Last week, the four nominated contestants went to a mall to appeal for votes. During the mall visit, the situation went worse due to the huge crowd and the contestants were mobbed too.

Bigg Boss 11: This EVICTED contestant all set to make her BOLLYWOOD DEBUT?

It is being said that someone took advantage of the rush and pulled Hina Khan's hair. Few videos of the same incident also went viral all over the internet[WATCH VIDEOS HERE...]. The incident shocked Hina to a great extent that she was zoned out for a while. Hina fans later claimed that Shilpa Shinde fans are responsible for this disgusting act. But there's no proof of the same. Hina Khan screamed as someone pulled her hair in the crowd

Now TV actor & Hina's 'Khatron Ke Khiladi 8' co-contestant is disappointed with the same. Speaking about the same, Ravi tweeted that, "Misbehaviour with @eyehinakhan in the mall is saddening and disgusting"

Misbehaviour with @eyehinakhan in the mall is saddening and disgusting Ravi Dubey is friends with both Hina Khan and Vikas Gupta. He was seen supporting them many times on social media and wanted them to stand together[READ HERE...]. Later, Ravi even slammed Hina when she mocked his buddies Rithvik Dhanjani and Karan Wahi in an unseen video from the show[READ HERE...].

Hina Khan's name has been embroiled in many controversies ever since her entry in 'Bigg Boss 11'. But Hina has came out as one of the strongest contestants in the show as her loyal fans are still supporting her. Now, it'll be interesting to see if she will come out as the show's winner or not.

Stay tuned for more updates related to 'Bigg Boss 11' and its contestants!