By: ABP News Web Desk
Updated: 12 Oct 2017 06:36 PM
New Delhi: Bigg Boss 11 is definitely going to give fame to many contestants. But many times we have seen that contestants hide a big secret of their life just to be in the show. Bigg Boss 10’s winner Manveer Gurjar too kept his marriage a secret. It was revealed after he won the show.

Well, this time too we have one such contestant and it is Puneesh Sharma. During his entry in Bigg Boss, Puneesh declared himself and also said that he is ready to mingle. Few days ago he was also seen kissing Bandagi Kalra but we exclusively revealed to you that it was all part of plan.

The latest edition of the popular television series has commoners from all walks of life. But, one of them clearly stood a class apart on the premiere night. Yes, you guessed it right! Here, we are talking about Puneesh Sharma, whose introductory video clip definitely made heads turn inside the heated house. The youngster, who calls himself a chick magnet and a party animal, made it pretty clear that he has participated in the show to rule and make it his own territory. Interestingly, he has already won a reality show back in 2009. Sarkaar Ki Duniya, a TV program hosted by Ashutosh Rana, witnessed Puneesh emerge as a winner, leaving behind 17 other contestants. #bigboss #bigboss11 #bigbossseason11 #bigbossofficial #hinakhan #priyanksharma #vikasgupta #benafshasoonawalla #shilpashinde #arshikhan #puneeshsharma #hitentejwani #shivanidurgah #zubairkhan #sapnachaudhary #bandgikalra #jyotikumari #luvtyagi #mehajabeensiddiqui #lucindanicholas #sabyasachisatyapathi #akaashanildadlani #beingsalmankhan #appy #appyfizz #oppo #oppocameraphone #bigboss10 #bigbossupdates #bigbosscolourtv

Now it is being said that Puneesh is a married man and lied to makers about his single status. As per news in an entertainment portal, “Puneesh, who is almost 34-year-old, has not only lied about his age at the reality show, he has also hidden his marital status. He is, at present, separated from his wife and has filed papers for divorce.”

The source of the portal also revealed that the reason of Puneesh’s failed marriage was that his wife couldn't live upto his playboy lifestyle.

Check out this picture of Bigg Boss 11 contestant Puneesh Sharma with his wife: 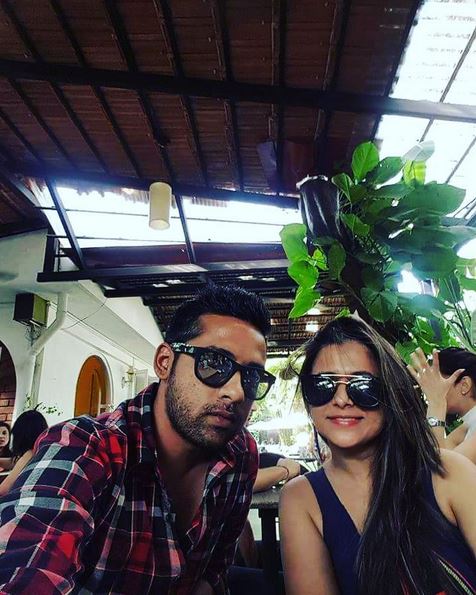 Well, before Puneesh, there were rumours about Sapna Choudhary too. But soon it was revealed that she is unmarried and pictures were part of a song video.