After the promo video of Friday episode was shared by the makers which showed Asim Riaz losing control after Paras Chhabra instigated him, the rumors over his eliminations from the house started making rounds on social media. Now Asim's Doctor-brother Umar Riaz has quashed the "fake news"

By: Shruti Srivastava
Updated: 25 Oct 2019 08:44 PM
The 'Bigg Boss 13' house literally turned into a mud-slinging game with the Saanp-Seedhi task gone awry. The nominated contestants had to make their ladders with the mud while the safe housemates Arti Singh and Asim Riaz had to ruin it. After the major scuffle between Sidharth Shukla and the bahus of the house Devoleena Bhattacharjee, Mahira Sharma, Rashami Desai on the first day of the task, it was stopped. It continued the next day but things got even worse with major fights erupted along with character assassination of Shenaaz Gill at hands of Siddharth Dey and Shefali Bagga. Asim, who played the peace-maker on Day 1 of the task, lost his control on Day 2 too. Bigg Boss bashed the housemates for their dirty fights cancelling the task and eventually nominated all the contestants for eviction this week.

A teaser video giving a glimpse into the next episode that will telecast tonight on Friday, showed another major tiff between Paras Chhabra and Asim Riaz when the latter objected to the former's friends on hiding the tea powder. The promo shows Asim getting enraged and breaking things around with also taking off his mic. The two locked horns and Asim can be seen charging at Paras too while Sidharth Shukla trying to stop him. Paras even complained to Bigg Boss. Paras can be seen laughing in the video too after instigating Asim who gets infuriated at him.

And yet another one showed the three of them being summoned in the confession room with huge debates and arguments going on in the house. In the end the narration in the video says - "Kya weekend se pehle hi ho jayega koi beghar?" hinting at an eviction and also showing the main door opened.

The next... news of Asim Riaz' eviction from the house started floating online. The fanclubs got worried and started slamming Bigg Boss as it was being said that Asim has been thrown out the house.

However Asim's brother Umer Riaz who's a doctor and surgeon by profession, has come out and denied all the rumors. Umar who's handling his younger brother Asim's Instagram handle currently, took to social media and quashed the fake news of Asim's eviciton.

He wrote in his message- "Guys Asim is not evicted. It's all fake news. A fight took place between him and Paras but things are in control now. Keep voting to support him." 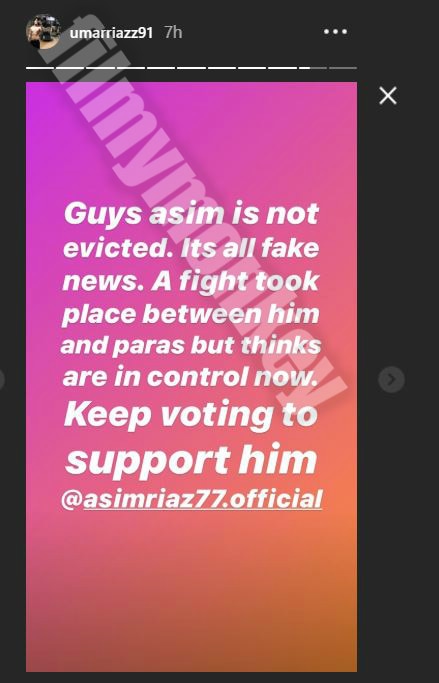 Filmymonkey brings you this news first.

Asim's brother Umar who has 'Surgeon' mentioned in his Bio-details on social media, has also 'Senior Resident at Sir H N Reliance Foundation Hospital and Research Centre and Internship at Government Medical College, Jammu' added in the info about him.

The brother has his younger sibling's back now and has been supporting him since Day 1 of his Bigg Boss 13 journey.

Just like his model-brother Asim, Umar also works out regularly and looks as hot has his Bigg Boss 13 contestant brother.

The Jammu and Kashmir boy Asim's popularity sky rocketed in the past weeks which surprised everyone since he was bashed in the first week by BB fans for quitting the first task. His behaviour lately however got him a lot of praise and he trended even on Wednesday night for trying to calm down Sidharth Shukla who lost all control during the task.


Carry on with the hard work you started, definately ull achieve what u strive for!????????#keepflexing #workoutroutine #hardworkneverfails #mumbai

This week has been very eventful with everything wrong imaginable, taken place inside the BB 13 house. How host Salman Khan deals with it in the Weekend Ka Vaar episode on Saturday, is something the audience now eagerly await to see.

Watch this space for all updates!