The former Bigg Boss contestant, Sofia Hayat shared her bold picture to show her tan lines after spending some time on a beach in bikini.

By: Filmymonkey Team
Updated: 13 Sep 2019 10:08 AM
Former model-turned-actress Sofia Hayat often hits the headlines for her bold stint on social media The 'Bigg Boss 7' star, who doesn't feel shy in exposing her bold side, recently posted a topless picture covering her assets with her hands.


1 hour in the sun! Is that a bikini or tan lines??? #telaviv #hiltonbeach #tanlines #sofiahayat

Apparently, Sofia shared the picture to show her tan lines after spending some time on a beach in bikini.

She shared another bold topless pic flaunting her behind in a red bikini brief:

The pics seemed to be taken during her recent trip and she also shared similar pics on her Instagram stories: 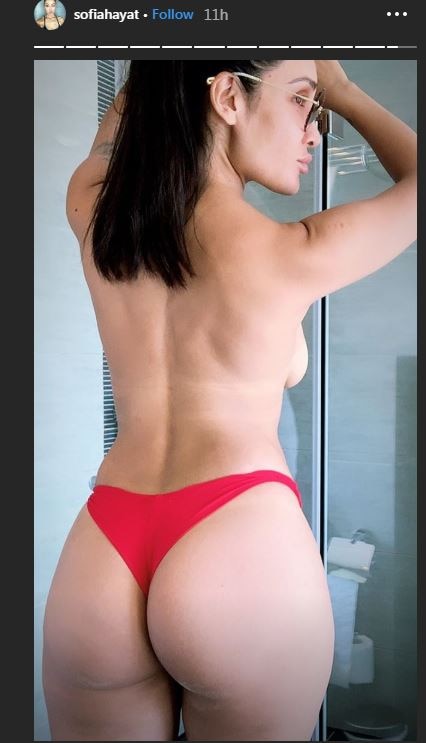 
Thankyou to the Goddess @litasattva who has bought rocket yoga into my life. I am opening more than I ever thought I could. Thankyou for your incredible energy. And Thankyou to @raica_oliveira for the introduction. I have seen your journey with rocket and hope to achieve as much as you have. 🙏🏾 what an honour to see you grow. #rocketyoga #yoga #teacher #guru #sofiahayat #london #battersea #chelsea

Meanwhile, in 2016, she became a nun in order to embrace her spirituality. Sofia, who was born in England, participated in the 7th season of the reality show 'Bigg Boss' and gained much popularity from it.

Sofia often posts sensuous and semi-nude pictures on social media. While her genuine fans appreciate her beauty, most of her mock for the same reason.