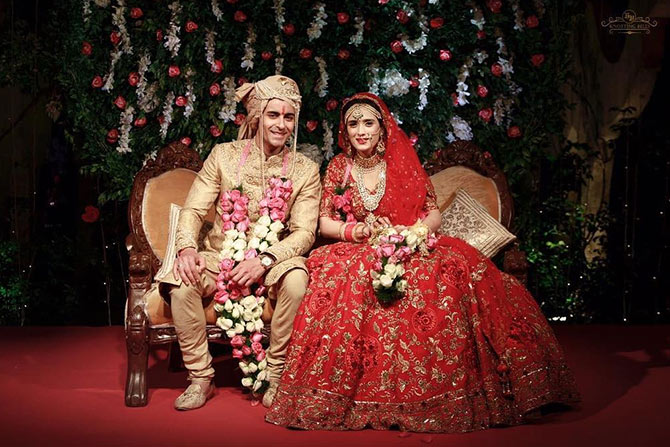 Pankhuri captioned the video as, "Our First Anniversary! ❤️❤️ Love you ❤️"

Gautam too posted a picture with wife Pankhuri to wish her. He wrote, "Happy 1st to us ❤️love you @pankhuri313"

The couple, who was twinning in Balck, was all smiles while cutting their anniversary cake. Take a look at some more pictures from Gautam & Pankhuri's first wedding anniversary celebrations (SWIPE LEFT):

Speaking about Pankhuri & Gautam's love story, they met on the sets of their TV show 'Suryaputra Karn' and fell for each other. Interestingly 41-year-old Gautam is around 15 years older to Pankhuri who is in her early twenties, however the huge age gap was never a hurdle between them & they are happily married now.

On the professional front, Gautam Rode has featured in many popular TV shows including 'Baa, Bahu aur Baby', 'Lucky' & rose to fame after playing the lead role in 'Saraswatichandra' opposite Jennifer Winget. Later, he did shows like 'Mahakumbh' & 'Suryaputra Karn'. He is currently seen playing the lead role of 'Prince Veervardhan' opposite Additi Gupta in the second season of Star Bharat's 'Kaal Bhairav Rahasya'.

Whereas, Gautam's gorgeous wife Pankhuri has been a part of various popular shows like 'Yeh Hai Aashiqui', 'MTV Fanaah', 'Suryaputra Karan' among others & became a household name after playing the lead role of 'Amala' in Star Plus show 'Kya Qusoor Hai Amala Ka'. Post her wedding, she has seen in doing episodics in Colors' 'Kaun Hai?' and AndTV's 'Laal Ishq'.