Ankita Lokhande who made her Bollywood debut this year alongside Kangana Ranaut in Manikarnika: The Queen celebrated Holi with her rumoured boyfriend Vikas Jain.

By: Filmymonkey Team
Updated: 22 Mar 2019 01:37 PM
HIGHLIGHTS
TV actress Ankita Lokhande who made her Bollywood debut this year alongside Kangana Ranaut in  Manikarnika: The Queen of Jhansi had her 'bestest holi' this year. The actress who was heaped praises on for her performance in the film celebrated the festival of colours with rumoured boyfriend businessman Vicky Jain. 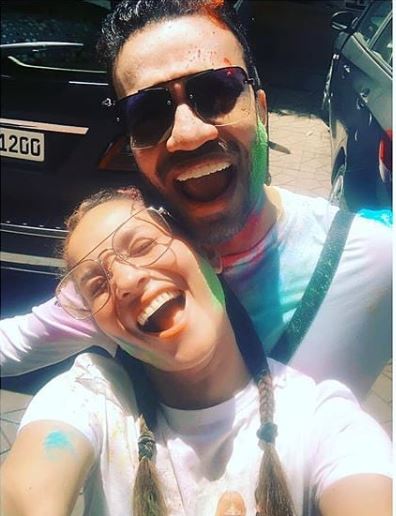 In a series of pictures shared on Instagram, Ankita can be seen posing with Vicky looking super happy and excited. Donning white shorts paired with white tee and rocking sunglasses the duo can be seen different poses.

In one of the pic the actress is sitting on Vikas's shoulders while totally smeared in colours.

The actress also celebrated with her TV industry friends including Arjun Bijlani:

Ankita was in a long term relationship with actor Sushant Singh Rajput. The couple called it quits in 2016 after dating for six years.

On a related note, the news of Ankita’s love-affair started with rumours, but a few weeks back, the stunning actress had confirmed that she is in love as she had said, “He is a very nice guy. He is a businessman from Bilaspur. Yes, I am in love and you will get to know about it when the time is right.” And when Ankita was quizzed about her wedding plans, she had said, “If it happens, I will let you know and invite you for the wedding. I can’t say anything right now, but there are no such plans, yet. I am just focussing on work at the moment.”