Dipika's husband and actor Shoaib Ibrahim shared a picture on his Instagram stories wherein he took his wife to the hospital for a check-up.

By: Filmymonkey Team
Updated: 27 Sep 2019 12:05 PM
Bigg Boss winner and a popular television actress Dipika Kakar, who is currently playing the role of lead actress Sonakshi in Kahaan Hum Kahaan Tum, has fallen ill due to her hectic shooting schedule.

Dipika shoots back to back and does not get enough rest due to which the actress has fallen ill.

Dipika's husband and actor Shoaib Ibrahim shared a picture on his Instagram stories wherein he took his wife to the hospital for a check-up.

In the picture that Shoaib shared, we see Dipika with a thermometer in her mouth. 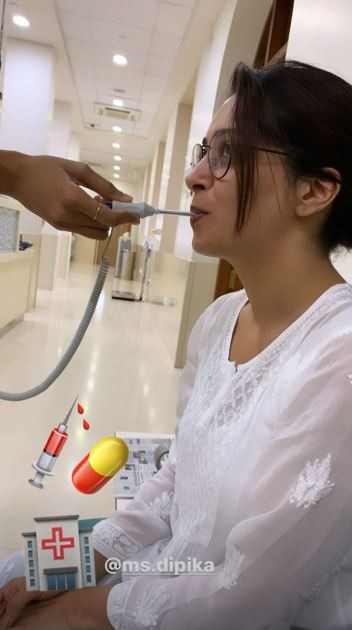 Dipika got married to her co-star Shoaib in February 2018, the couple has been with each other through thick and thin and often gives couple goals to fans.


Posing just before we walked down for our Reception last evening!!! My outfit : @kalkifashion #dodilmilrahehain #dodilmilgaye

Dipika became a household name with her role as Simar Bhardwaj in Sasural Simar Ka and won hearts with her exceptional performance. Her on-screen chemistry with her husband Shoaib was applauded by the viewers.

After Sasural Simar Ka, Dipika participated in Bigg Boss 12 and became the winner. Dipika's current show Kahaan Hum Kahaan Tum too is doing quite well on the TRP charts.


Not just once or twice, but many a times u have proved yourself. Proud husband❤️ A big thankyou to everyone who have supported us throughout this journey.🙏🏻 #grattitude #blessed

We hope Dipika gets well soon!