Khatron Ke Khiladi 10 contestants are off to Bulgaria for the shoot and were clicked at the Mumbai airport posing together.

By: Filmymonkey Team
Updated: 01 Aug 2019 10:25 AM
One of the most-awaited reality TV show Khatron Ke Khiladi is back with its 10th season and will see your favourite celebs indulging themselves in action-packed risqué stunts. This season too will be hosted by ace film director Rohit Shetty and will be shot in Bulgaria.

And the latest update is that the contestants are off to Bulgaria in the wee hours of Thursday for the shoot. TV actors Karan Patel, Karishma Tanna, Shivin Narang,Tejasswi Prakash, Adaa Khan, Raazi actress Amruta Khanvilkar along with RJ Malishka, comedian and host Balraj Sayal and Bhojpuri superstar Rani Chatterji were spotted at the Mumbai airport as they left for Bulgaria for the shoot. 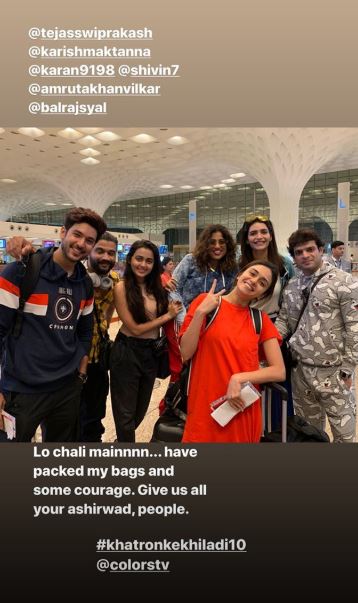