Television actress Krystle D'Souza has been trolled after she shared a picture alongside Pandya on social media.

By: IANS
Updated: 06 May 2019 11:02 AM
New Delhi: There seems be no end to controversies when it comes to Indian cricketer Hardik Pandya. Television actress Krystle D'Souza has been trolled after she shared a picture alongside Pandya on social media. One of the users even made a racist comment saying, "Kaalu bhai. Aap West indies team ke world cup squad main select kyun nahi huye?"

Krystle posted the image on Instagram with a caption "Mere Bhai Jaisa Koi Hard ich Nahi Hai #brotherfromanothermother". The moment she shared the photo, a number of people trolled her for calling Hardik her brother.

Karan Tacker is getting 'close' to actress Shreya Chaudhry after alleged breakup with Krystle D'souza?

Krystle responded saying that the person was being "mean and obnoxious".

Actor Aparshakti Khurana told the user, identified as Sameer: "I think you should not write such comments and definitely not use such language. We all love Hardik because he is a performer. You should rather encourage the Indian team, especially before the World Cup." 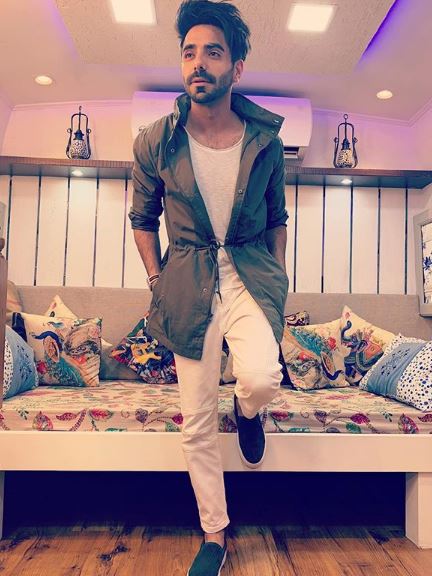 "That's so well put! People are so mean and obnoxious and just because they are sitting behind a screen typing, they think they can get away with anything! I guess ignorance is bliss in this case! Their words make no difference to his superb performance... BUT thank you," Krsytle also commented on Aparshakti's reaction.

Take a look at the conversation below: 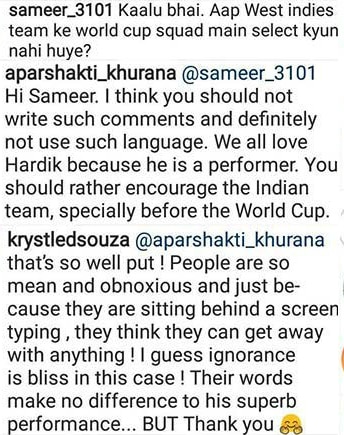 Hardik has been facing a backlash ever since his sexist comments on a chat show "Koffee With Karan" alongside K.L. Rahul. Both cricketers had made sexist and misogynistic comments on the show which did not go down well with many people.

The two were even handed a provisional ban by the Supreme Court-appointed Committee of Administrators (CoA) and were also fined Rs 20 lakh each.