Mahhi Vij and Jay Bhanushali welcomed their first biological child, daughter Tara Jay Bhanushali in August, making them a family of 5, including their 2 adopted kids

By: Filmymonkey Team
Updated: 04 Oct 2019 05:46 PM
'Laagi Tujhse Lagan' actress Mahhi Vij and her husband Jay Bhanushali who's currently hosting Sony TV reality show 'Superstar Singer', welcomed their first biological child in August end which makes them a family of 5, with also two adopted kids. The new parents are thrilled to have their Princess they named Tara, in their lives and both of them keep treating fans with some adorable family pictures posing with their children. Mahhi in her latest Instagram post, uploaded a picture from her outing which she made with both her daughters, newborn baby girl Tara and elder one named Khushi Ray.

Mahhi holding the bundled 1 month old Tara in her arms and sleeping Khushi leaning on her seated by her side in the car, captions the picture- "When your prayers are answered god gives you the best gift called daughter I feel blessed to be mother of two beautiful daughters @iamkhushiray @tarajaybhanushali".

The mommy of two adopted children, daughter Khushi and son Rajveer, and her biological child, baby girl Tara, is being showered with love and praises by the fans over this post. Jay and Mahhi have adopted their house help's children. 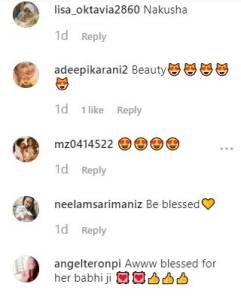 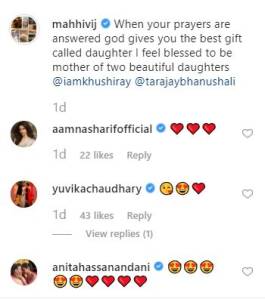 In September 2017, Mahhi and husband Jay Bhanushali had decided to fund the education of their caretaker’s kids, Khushi and Rajveer and since then the four of them live like a family.

Mahhi and Jay decided to have a child 8 years after their wedding and while there were reports that the actress faced fertility issue earlier, Mahhi denied it in an interview a while back[Pregnant After 8 Years of Marriage, Mahhi Vij Clarifies There Was No Infertility Issue; Hubby Jay Supports Her].

Here are some more adorable family pics the couple posted lately on Instagram:


Reason for all my smile and happiness..there is no comparison the kind of calmness you get early morning kissing your child. #babylove #babygirl #girl #newborn #fatheranddaughter #father #love #lovemydaughter @tarajaybhanushali #tarajaybhanushali


What is the difference between mother and wife? One woman brings you into this world crying … and the other ensures you continue to do so.????????“On the day of our wedding, I felt such a great happiness that I never imagined it would be possible to re-experience something similar, but when our baby was born I was even happier. My beloved wife, I thank you for so much for all the happiness and love you give me. I Love you and yes HAPPY 9TH ANNIVERSARY TO MY BEAUTIFUL WIFE @mahhivij #marriageanniversary #married #couple #couplesgoals #church #wife