"Hve seen u past few months & exactly know.." -Kamya along with Divyanka, Sneha SUPPORT Manish over his open letter with ugly details against Srishty Rode!

Former 'Bigg Boss 12' contestant Srishty Rode's ex-fiance Manish Naggdev bursts out in an open letter he posted on Friday noon making strong allegations against her claiming she had broken up with him over a phone call, not even giving him proper closure and that she used him.

By: Shruti Srivastava
Updated: 07 Jun 2019 09:24 PM
The actress and former contestant from 'Bigg Boss 12' Srishty Rode is in headlines today along with her ex-fiance & actor Manish Naggdev after the latter penned an open letter breaking his silence 6 months after their break up making strong allegations against her saying she used him for professional gains. He also revealed that it was Srishty who broke up with him two years after their engagement in February 2017 and that too over just a phone call. The long letter posted in the noon today has now gone viral with respective fans of Srishty and Manish taking their sides. While Sristhy, who's currently in Portugal, hasn't yet reacted to it, the other small industry members have started giving their opinions and the two popular tv actresses Divyanka Tripathi Dahiya and Kamya Punjabi have openly supported Manish.

Manish had captioned his Instagram post carrying the screenshots of his typed-letter- "It’s ok to vent it out. I hope all your questions have been answered with this. #stop".

Divyanka, who's currently playing the popular character of 'Ishita Bhalla' in Star Plus show 'Yeh Hai Mohabbatein' has shared screen with Manish in his debut TV show 'Banoo Main Teri Dulhann' back in 2006. And the actress came out openly in supporting her co-actor. She reacted to Manish's Instagram post by writing: "Always by your side Manish. I know you for 13 years now. I know what you are made of! Just let the bygones be bygones and keep moving ahead with your head held high like before. Best times are yet to come. Trust me![heart eyes emoji]". On the other hand Kamya Punjabi, in her support to Manish, also validates his claims he made in the letter, saying she is witness to what he went through in the past few months. Kamya, who's currently seen as 'Preeto' in Colors TV show 'Shakti - Astitva Ke Ehsaas Ki', wrote in her reaction to his post on Instagram- "Yes it is so important to talk, to share... Everyone has limits! Sometimes u bend, sometimes u feel crushed, but one day u reach that point where enuf is enuf! If u luv someone wit all ur heart, their actions are affecting u in negative ways... there has to be line when u say "enough" i m glad u are venting it all out! God bless you my friend!". 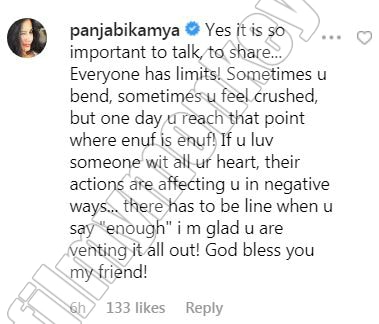 And in reply to his Twitter post, Kamya wrote- "Yes it is so important to talk, to share! I have seen you past few months n i excatly know how it feels... nobody deserves this!".

Kamya also defended Manish when a person wrote on Twitter bashing the actor "feel sad at how laundry being done publicly @ManishNaggdev on his break up with @SrSrishty". Kamya replied to the person- "Dirty laundry? The word is DEPRESSION".

Yes it is so important to talk, to share! I have seen you past few months n i excatly know how it feels... nobody deserves this! https://t.co/llt1NGhDUj

Another popular actress to support Manish is 'Veera' fame actress Sneha Wagh who's currently playing 'Moora' in Sony TV's historical drama 'Chandragupta Maurya' that stars Faisal Khan in lead role. She commented on his post: "Manning Up Much ???? P.S :- Not All Men Are Shallow [heart emoji] @manishnaggdev definitely not you [heart emoji]".

Along with these three, the winner of 'Bigg Boss 10' Manveer Gurjar, TV actor Ruslaan Mumtaz's wife Nirali Mehta and others have also been writing messages in his support. 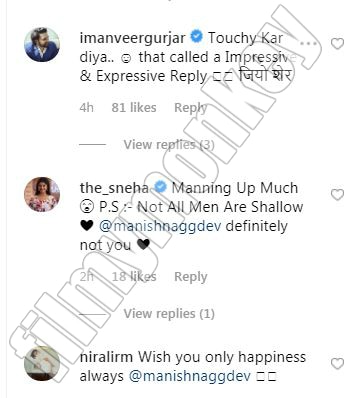 Manish and Srishty had exchanged the engagement rings on February 15, 2017 in a private ceremony after dating for about 3 years. When Srishty entered the Bigg Boss 12  house, Manish held the ground for her outside and defended her during many controversies apart from constantly making voting appeals for her which included her alleged relationship with tv actor and co-contestant Rohit Suchanti. A while after the show ended, Srishty and Manish parted ways and the actor in an interview had earlier said that there were minor disagreements and difference of opinion which lead to their break-up, also denying it was Rohit behind this.

And now he claims it was her who pulled the plug on their relationship alleging "she manipulated him and used him for her professional gains."

And with Kamya, Divyanka, Sneha and other also supporting him strongly for his open letter containing severe allegations against Sirshty, it is sure to invite more reactions, now from Srishty's friends from the small screen industry. Why Manish chose to speak openly now(after 6 month of their break up) is because he was "shattered to know how a mutual friend he spoke to yesterday had this false information of him breaking up with her/leaving her."  [refer the link to FULL LETTER above!]

Now we wait to hear Srishty's side of story too and she will most certainly react to it soon.

Stay tuned to this space for all updates!