'Naagin 3' Grand Finale: Show to have a happy ending, reveal pictures from the last episode shoot!

Bela(Surbhi Jyoti) and Mahir(Pearl V Puri) who are reincarnated as Shravani and Mihir post 24 years leap on the show, will finally tie the knot in the new birth too and their marriage pictures take social media by storm.

By: Shruti Srivastava
Updated: 22 May 2019 10:16 PM
The 'Naagin 3' fans saw their favorite Bela-Mahir aka Behir from past life reuniting and romancing again post rebirth as Shravani and Mihir but their reincarnated identities are not married yet. While the Naagrani Bela aka Surbhi Jyoti along with the MahaNaagrani Shivangi aka Mouni Roy, is yet to win the battle against Sumitra(Rakshanda Khan), Taamsi(Krishna Mukherjee) who are joined now by Yamini(Sudha Chandran) and Shesha(Adaa Khan) too, the ending isn't anything like it was in Season 2, suggest latest shoot pictures. 'Naagin 2' had left audience perplexed with Shivangi getting killed by her husband Rocky(Karanvir Bohra) who was instructed to do so by her father Ritik(Arjun Bijlani). She is back now to find answers and we showed you on Tuesday how this mystery gets solved with Shesha confessing she was disguised as Rocky-Ritik and took Shivangi's life[‘Naagin 3’ Grand Finale PROMO- Mystery surrounding Shivangi’s death solved! Shesha killed mahanaagrani]. In the latest episode of 'Naagin 3', Sumitra and her team has managed to get the Naagmani cursed-free after a big fight with Shivangi and Shravani. And another promo also reveals that these two along with Mahir(Pearl V Puri) and Vishakha(Anita Hassanandani) will be trapped in the tehkhana. Some reports say when Shesha appears and reveals she had killed Shivangi, the two battle out resulting in latter's death.

The drama-filled grand finale episodes will telecast coming weekend on 25th May and 26th May at 7pm but what the audience can be sure of is that their favorite jodi of Bela and Mahir will end up marrying each other, again. 'Naagin 3' stars have been shooting the the last episode lately and the pictures going viral on social media show Surbhi and Pearl dressed as bride and groom.

Some of these were shared by Surbhi and Anita on Instagram:
[swipe to view all pics] 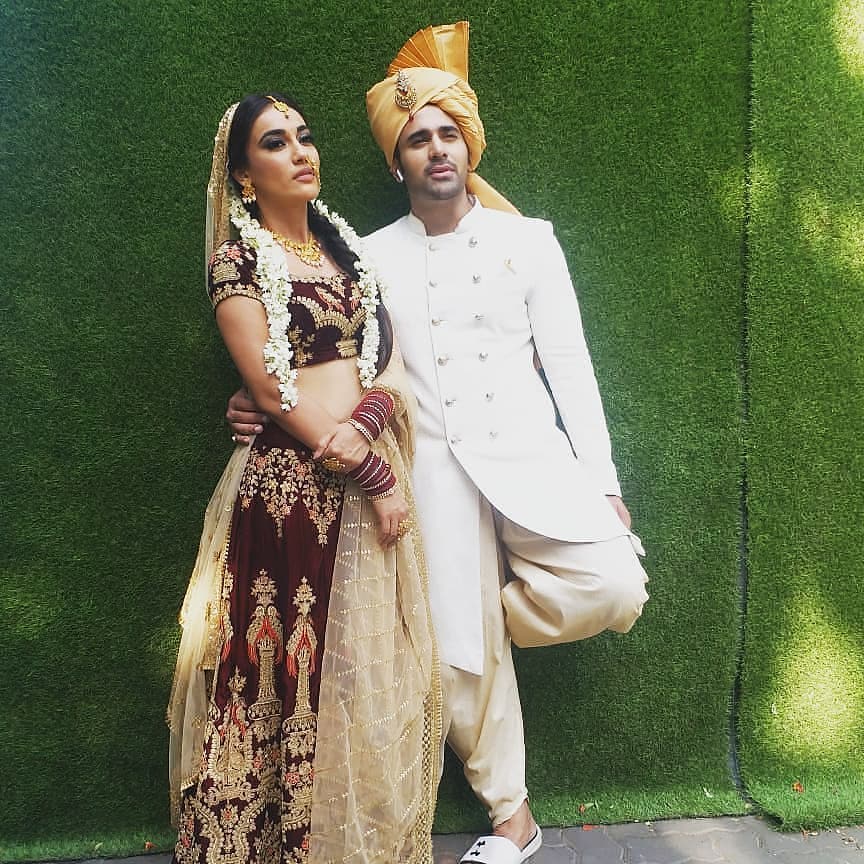 Pearl and Surbhi behind scene on 'Naagin 3' sets

While Behir are all decked up, why Vish is dressed in white makes us wonder if her character dies too after her husband Vikratn(Rajat Tokas) and she revisits to bless her Naagrani-friend Bela on her wedding!

Actor Jiten Lalwani who recently entered the show playing Shravani's father post 24 years leap, also hints in his caption he gave to these pictures that the show ends with this shoot.

Posing in his picture with Pearl, Surbhi and his onscreen wife Madhuri Pandey, Jiten wrote - "It is always my pleasure to work with @balajitelefilmslimited and @ektaravikapoor loved the experience to work in @nagin_seriess with very humble and talented @pearlvpuri @surbhijyoti@rakshandak27 @anitahassanandani@madhuripandeyofficial and the entire cast and crew of Nagin 3 !"

The 'Season 3'  has been the most successful in Ekta Kapoor series of 'Naagin' and it remained in the top positions on Barc TRP charts throughout in it's 1 year long run which is also the longest. Ekta had recently shared in an interview thats he believes 'Naagin' was great but Season 2 got messed up but thankfully 'Naagin 3' picked up well.

'Naagin 3' will be replaced by another supernatural show 'Kawach - Mahashivratri' starring Deepika Singh, Namil Paul and Vin Rana in lead roles from the coming weekend itself i.e. 25th may.