By: Filmymonkey Team
Updated: 29 Oct 2019 04:22 PM
The very hot tv actress who recently confirmed she is doing Ekta Kapoor's 'Naagin 4- Bhagya Kaa Zehreela Khel' and is reportedly set to replace 'Naagin 3' lead Surbhi Jyoti in the next installment, left fans swooning with her sizzling avatar at the Diwali bash thrown by T-series' Kishan Kumar donning a glitzy silver lehenga with a deep neck choli. A video of Nia dancing to the tunes of Guru Randhawa's 'Suit Suit Karda' with the punjabi singer himself, also went viral. But the silver lehenga which made Nia hit the headlines this Diwali, also became news after it caught fire in an accident during the festival.

Nia's lehenga caught fire during Diwali party and she shares this with also the picture of her burnt lehenge on her Instagram page.

Nia took to Instagram stories to share details of her little mishap, revealing that her lehenga caught fire by a diya at the party. She did not sustain injuries thanks to the layers in her outfit. She shared a photograph of the burnt ensemble and said that she is still unsure of how she was saved from injury.

The actress wrote: "The power of a diya. Caught fire in a second! I got saved by the layers in my outfit or some guards you and protects you." 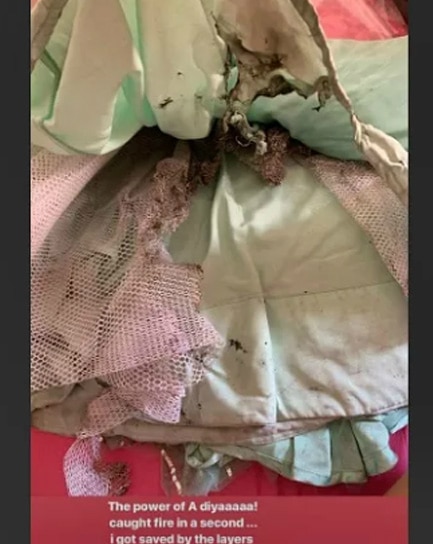 (With input from IANS)

NEXT 'Kimu Ki Pheli Diwali': THESE Adorable Pics Of Navina Bole's Daughter Will Melt Your Hearts!