Nach Baliye 9: "Gharwali Baharwali" -Karan Patel To Aly Goni Over Appearance Of His Rumored Girlfriend Jasmin Bhasin Who Will Clear The Air On His Relationship Status!

By: Shruti Srivastava
Updated: 22 Aug 2019 02:47 PM
Popular ex-couple TV actor Aly Goni of 'Yeh Hai Mohabbatein' fame and 'DJ Wale Babu' girl Natasa Stankovic are currently participating in the celebrity dance reality show 'Nach Baliye 9' and things are sure to get more spicy when they will be joined on stage by actor's rumored girlfriend Jasmin Bhasin. 'Dil Se Dil Tak' actress will make an appearance on the show coming weekend during which she will clear the air about the current relationship status of Aly and Natasa. The upcoming episodes are also in news over the celebrity guests Prabhas and Shraddha Kapoor who will promote 'Saaho' on the show. Aly  Goni and Jasmin got close during their stint on 'Khatron Ke Khiladi 9' last year and the rumor mills were abuzz with their dating news. Jasmin will also address this on the show.

Aly posted a picture with Jasmin from the show on his Instagram page and wrote in caption - "[heart eyes emoji]See who is coming this week on #NachBaliye9 to support me and @natasastankovic__ and meri izzat ke lagnewale hai [man facepalming emoji][laughing and crying emojis]... thank u soo much @jasminbhasin2806it was funn [red heart emojis] @starplus@banijayasia #Sktv".

Yeh Hai Mohabbatein: Original 'Raman Bhalla' Posts A Pic & Message After Chaitanya Choudhary Gets Introduced On The Show As His New Face!

Aly hasn't yet replied to his comment but the fans are having a hearty laugh over it. 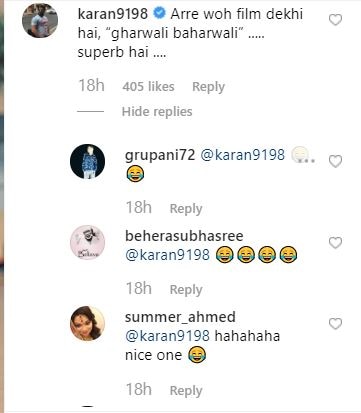 Talking about her appearance in 'Nach Baliye 9', Jasmin told India Forums, "Yes I came on Nach Baliye to support my best friend who was in danger. They wanted to know what I know about Aly and Natasa relationship as they think they are not ex and are dating. I told them they should date and give it a try. I was there to wish them luck."

Aly on the other hand said - "Jasmin is my best friend and also there was rumour about me dating her and it will also get cleared on the stage."

Despite their break up a while ago, Aly and Natasa have been in touch and often like and comment each others' social media posts. Their chemistry remains intact and it shows on 'Nach Baliye 9' stage too during their performances and off-it.

On a related note, the jodi that gets eliminated this weekend, are Urvashi Dholakia and Anuj Sachdeva.