By: Filmymonkey Team
Updated: 30 Oct 2019 05:35 PM
Popular small screen actress Kamya Punjab who currently plays 'Preeto' in Colors Tv show 'Shakti - Astitva Ke Ehsaas Ki' has been making headlines over her love life lately ever since the news of her dating Delhi-based marketing professional Shalab Dang came in September. The two came out in open too by posting their romantic pictures together on social media. 40 yr old Kamya, the mommy of a 9yr old daughter named Aara, is reportedly getting married to beau Shalabh next year too. Shalabh also has a son Ishaan from his previous marriage. Kamya and Shalabh have made family trips together too and while we saw her bikini pictures setting internet on fire, here's a new picture, the former 'Bigg Boss 7' shared donning a monokini and looking super hot in it['Shakti' Actress Kamya Panjabi Flaunts Her Curves In Bikini, Shares Adorable PIC With Beau Shalabh Dang].

Kamya took to Instagram this afternoon and posted a fresh picture of her's wearing a black leopard print monokini standing in water inside a pool.

Actress was earlier married to businessman Bunty Negi and the two got divorced in 2013. Kamya recently celebrated Diwali and before that Ganesh Chaturthi with Shalabh too. The couple also celebrated their children Aara and Ishaan's birthdays on October 6 and 9 respectively. The four of them went to Dubai to celebrate their birthday and also enjoy a vacation. The actress shared a photo from their vacation on her Instagram story. 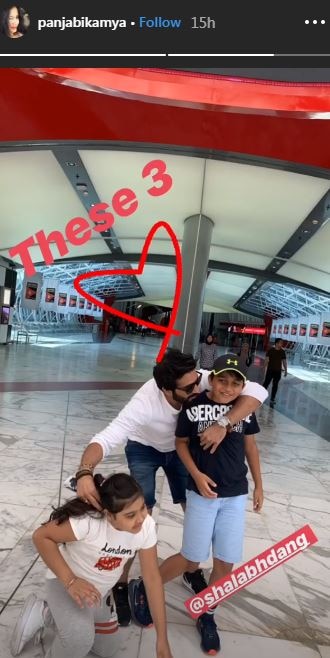 Apart from her current show, Kamya is also remembered for her stay inside 'Bigg Boss 7' where she was one of the strongest contestants. She has been working for two decades in the TV industry.

Kamya has also been actively participating in social media discussions over currently running Bigg Boss 13 and has been against the Bahus who played women card recently. Kamya strongly supports Sidharth Shukla.

Kamya has regularly been expressing her opinions on Bigg Boss 13. Here are some of her latest tweets on BB 13...