By: IANS
Updated: 07 Feb 2018 08:36 PM
Mumbai: Actor Karan Kundra, who is in a relationship with TV host Anusha Dandekar, says social media trolling has led to problems between them. The two will be seen on 'Mtv Troll Police'.

"I do feel guilty about this because this (trolls) is what she (Anusha) has to wake up to every day. This has led to problems between us. There are issues at my home as well. My mother scolded my sister the other day when my sister tried explaining this to her. It's not that she believes everything but she has now started reacting to it," Karan said in a statement.

Anusha and Karan started dating two years ago. The couple on 'MTV Troll Police' will be facing one of their trolls who attacked Anusha on Instagram and Twitter.

#1921 released yesterday... I hope you've all gone & seen it & loved it! Or have booked your tickets to do the same! Yes you may see this as me promoting something for someone special. It's just so much more than that... @vikrampbhatt has created this incredible film that takes you on a thrilling journey of emotions, suspense & surprises & so much fear!!! I want to say Thank you to him & his talented team for making something that looks as beautiful & frightening as the storyline! Vikram sir, @krishnavbhatt & crew you are just everything! @zareenkhan looks Stunningly beautiful in every frame & is so honest to her character, she makes you belive in love & bravery, she's just brilliant! Last but not least, I've seen this guy @kkundrra with so much passion & drive towards his first love, which is acting... I used to visit him on his TV sets & was always blown away at how easy he made everything look, he didn't even have to look at scripts, he would just remember his lines! Then comes his next amazing journey of Hindi cinema & he takes my breath away once again... He is such an honest, pure actor, who made me forget that that's my Karan... It's Ayush... People even ask me, "do you feel weird to watch him kiss on screen?", truth is I'm rooting for his love story & want him to win... That's how real he makes it feel... I know alot of families get opportunities in our film industry, I'm just glad others also get their break, this is yours Karan, you deserve all of it, not only because you are insanely talented but because you are one of the purists souls I know. Reach for the stars baby, you already are one, it's your place on earth! ????

Reading the hate comments, Anusha said: "According to you being in love is a crime, in fact being in love online is a bigger crime. It's time we sit down face-to-face and talk about it."

Commenting on how trolls have affected their relationship, she said: "For me, trolling has increased ten fold. Maybe I lived in a bubble. Since the time I started dating Karan, my life has changed. It has been very difficult for me.


Happy Happy New Year... Let your heart be filled with love, kindness, forgiveness & peace... Believe in gratitude & the magic of it... Be immensely Thankful everyday for your health, life, love, work, our planet, our animals and each other! Shine super bright ???? 2018 is going to be incredible ❤️ #killitwithkindness ????

"Every morning I read at least 50 hate comments saying you aren't cultured or aren't good. I can't even say the things. Though my Hindi isn't great, I do understand the things they say in Hindi."

She says the trollers want her to break up with Karan.

Rannvijay Singha speaks on his terms with Ex-Girlfriend Anusha Dandekar!

"Trolls want us to break up because they love Kritika (his former girlfriend) and Karan together. They were in a TV show. They looked great. They were everybody's love," she added. 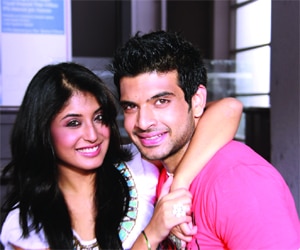 Watch shocking promo below in which a troll calls Anusha "ugly" and "chudail".

"Sun bhai teri ex Kritika Kamra bhot achi thi, yeh chudail teri zindagi barbaad kar degi" While @kkundrra moved on with his girlfriend @vjanusha, you guys clearly didn't. How would you feel if your girlfriend is called buddhi, or ugly, or is constantly accused of ruining your life? Ever wondered how poisonous it can get for the woman who has to face this regularly? Watch Anusha Dandekar and Karan Kundra give it back to their trolls this Saturday at 7 PM only on #MTVTrollPolice