By: Filmymonkey Team
Updated: 17 Aug 2019 06:07 PM
New Delhi: Popular TV actor Karan Patel has managed to win the hearts of the viewers with his power-packed performance as Raman Bhalla in Star Plus’ Yeh Hai Mohabbatein’. Karan’s chemistry with co-star Divyanka Tripathi has helped the show grab several eyeballs. The handsome actor has quit ‘YHM’ after playing the lead role for over five-and-a-half years to participate in ‘Khatron Ke Khiladi 10’. He has been replaced by Chaitanya Choudhary in the hit Ekta Kapoor show.

Although, Karan is out of town shooting for ‘KKK 10’, he shared a heartfelt post for his wife Ankita Bhargava on her birthday on social media.

‘’Wishing a very very happy birthday to the woman who changed my life and turned it into a fairytale .... cannot wish for anything less than the best of both worlds for you jaan. Mere words aren’t enough for me to tell you how much i love you or what you mean to me but i will say this, “You Make Me Want Myself To Become A Better Person Only So That I Can be Worthy Of Having You”. Wish you all you luck in the world. Love you for this lifetime and the rest to come. @ankzbhargava you are the priceless Award that God Rewarded me with,’’ Karan wrote on Instagram. 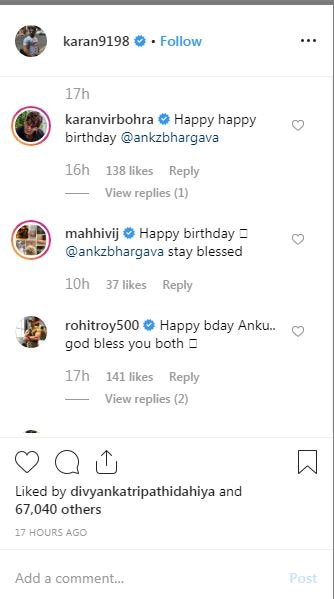 Karan and Ankita got married on May 3, 2015 in an intimate wedding ceremony. The two lovebirds are one of the most loved couples on Indian television.

Karan Patel is currently in Bulgaria, where he is shooting for the new season of ‘Khatron Ke Khiladi’. He shared a photo with the host Rohit Shetty along with the caption, ‘’With the man himself, @itsrohitshetty ... whose Cars land on Mars but on a serious note .... He is the #best when it comes to #action that sends cars flying in the sky & they never come back around .... but he is #unmatchable when it comes to #humility and having his feet firm on the ground.’’