By: Shruti Srivastava
Updated: 14 Aug 2017 07:16 PM
One of the most loved Bahus of Television, the famous actress Divyanka Tripathi aka Ishita Bhalla of Star plus show 'Yeh Hai Mohabbatein' is given the title of Superwoman by her fans as the adventurous lady shoots a daredevil building stunt herself for a scene.

Divyanka shared a video of a chase scene where one can see her in a building being chased by a man and then she leaps from one balcony to another and apparently without any harness.

Divyanka captions this video sharing it on Instagram - "How much I love this! #Chase and #ActionSequence in #YHM.
#AdventurousMe"

How much I love this! #Chase and #ActionSequence in #YHM. #AdventurousMe

A post shared by Divyanka Tripathi Dahiya (@divyankatripathidahiya) on Aug 13, 2017 at 11:46pm PDT

The fans are bowled over by her fantastic stunt and while praising it hugely, they are also pleading her to not take such risks for the show.

Calling her 'Superhero' and 'Superwoman', the fans are also intrigued with this latest action sequence of the show and can't wait to find out who's the man that made their fav 'Ishita' take that leap during the chase scene. 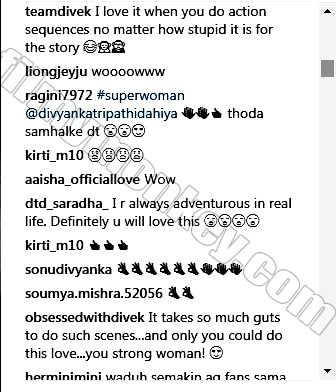 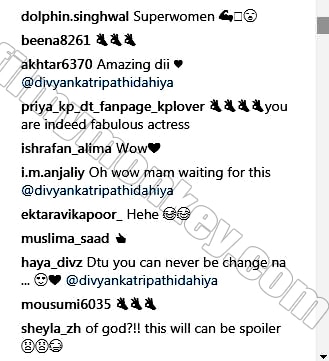 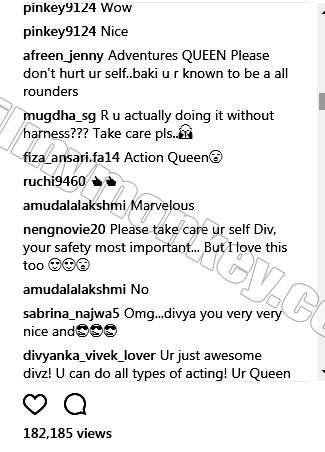 
Some speculated, that's 'Taneja', the possible murderer of 'Mani'.

3 days ago, Divyanka shared another glimpse from this sequence where she's seen wearing the same yellow suit and while she poses with two of her female fans, she told everyone the story behind it too which reveals that 'Ishita' actually gets shot on the episode by someone.

She wrote in this Instagram post, with the picture of these two young fans crying- "Trying to comfort two girls when they burst out crying thinking #Ishita is actually 'shot' in a shot..#PureInnocence #Love ❤️"


Trying to comfort two girls when they burst out crying thinking #Ishita is actually 'shot' in a shot.. #PureInnocence #Love ❤️

A post shared by Divyanka Tripathi Dahiya (@divyankatripathidahiya) on Aug 11, 2017 at 1:06am PDT

Well, in the latest track of YHM, 'Ishita' is making an effort to find out the real killer of 'Mani' after 'Shagun'(Anita Hassanandani) reveals to her the name of the real killer saving 'Raman Bhalla'(Karan Patel) from getting convicted for the murder instead.

Divyanka shared another video from the same sets after the building sequence and lifts a fake cemented building block with her arm 'injured in the firing'.. which sure must've made her fans heave a sigh of relief.

She wrote with this one - "...and we are not made of thermocol???????? #BuildingBlocks#AutoclavedAeratedConcrete"

...and we are not made of thermocol???????? #BuildingBlocks #AutoclavedAeratedConcrete

A post shared by Divyanka Tripathi Dahiya (@divyankatripathidahiya) on Aug 14, 2017 at 3:05am PDT

More pictures shared by fans from the sets reveal that she will finally get saved by Raman and Bala (Pankaj Bhatia) from the building.

With her stint at the dance reality show 'Nach Baliye 8' along with husband Vivek Dahiya and finally turning out the winner bagging the title, Divyanka's fan base has hugely multiplied.

The actress actress and a wife now, is thrilled to show her adventurous side to her fans as we read in her caption "How much I love this!".

We love it too Divyanka!

Are you impressed with Divyanka's action sequence too? Let us know in the comments section below!