Cyclists in Ambala get beaten and robbed, narrate the horrible ordeal

By: ABP News Bureau
Updated: 20 Feb 2018 05:34 PM
Ambala: We often go for a cycle ride with our friends but sometimes this may prove dangerous. In a shocking incident on February 17, cyclists in Ambala who took part in the Randonneuring organized by Audax India Randonneurs got robbed while covering their path.

Here is how the victim Suvro P Basu narrates his story.

"I and one of my friend were riding through a place called Shahpur flyover on way to Ambala. It was around 9.30pm, I was riding almost 15m ahead of my friend Prasun and we both were on good speed. We saw a bike with 4 guys who stopped a little ahead of us. I crossed them and moved ahead but suddenly  heard a huge noise."

"Immediately I turned back but couldn't see my friend. Initially, I thought that it was an accident and my friend Prasun crashed with his cycle. I ride back to check him. When I was around 20m from him I saw two guys holding his legs and shoulders. Within seconds a huge blow came out of nowhere to my head and I fall down on the ground with a pool of blood all around," he said.

The victim says that everything happened within a fraction of second that he not even got the time to understand what exactly happened. Before he could understand anything, the robbers hit him on his head. 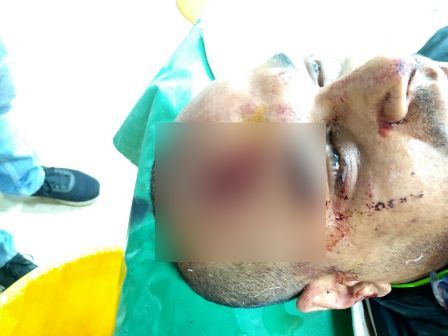 "I didn't even get time to understand the situation, I thought my friend met an accident but actually one of those four guys had hit my friend's head with the butt of the gun and he crashed badly. Obviously, he was unable to get up from the ground that moment."

"The two guys  were trying to loot him and before I could understand anything the third guy hit my head with a large stone and for probably for two minutes I was almost senseless."

"The moment I gained my conscious back and opened my eyes I found myself covered in blood and chocolates and other things that were in my pocket are all over the ground. I realized they took money from my pocket and threw the rest on the ground," he added.

Not just this the robbers even threatened to shoot him when he was stepping forward to help his friend who was in their custody.

"Two guys were hitting my friend with the gun on his face continuously, I pulled my neck scarf from the head and tried to stop the blood. Somehow I managed to get up to help my friend but they pointed the gun at his chest and said that if I will come close they will pull the trigger."

"Two cars were passing through the road, I shouted for help but as they pointed the gun at the cars they also didn't stop. I saw the third guy running away. The fourth guy on the bike was unable to start his bike  and just tried to run with his bike on the slope."

"When I initially took a turn back, down the flyover, I saw some shops down at the end," he said Shockingly! the people around were not even ready to help them. Finally, after shouting for help a local guy came like an angel to them and took them down the flyover.

Suvro says, "On one of the pan shop there were few guys sitting but none was ready to come for our help. I ran back to my friend. I was shouting continuously for help."

"While seeing me shouting those snatchers immediately crossed the road and ran away. A few moments later a local guy came and took us down the flyover."

Thankfully, the robbers were not able to locate his cell phone as it was in the frame bag. Suvro immediately contacted the police which reached to them within minutes of the call. 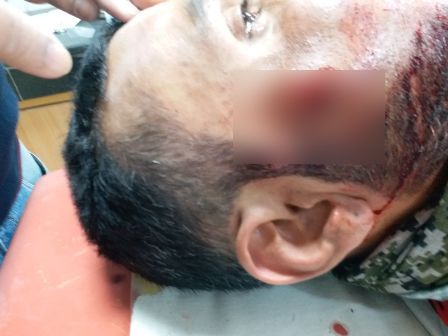 Police later took them to Ambala Civil hospital for treatment. Finally, the victim is happy that he and his friend both are alive but the incident puts a very big question mark on the security of cyclists who take part in such events.

The organizers which arrange such sports should take care of the security of the participants.