The Shape of Water, which was nominated in 13 categories in Oscars grabbed 4 awards in total including the award for Best Picture and Best Director.

By: ABP News Bureau
Updated: 05 Mar 2018 05:40 PM
Los Angeles: The 90th Academy Award started off with a bang as Jimmy Kimmel took a dig at Harvey Weinstein. The Shape of Water, which was nominated in 13 categories in Oscars grabbed 4 awards in total including the award for Best Picture and Best Director. 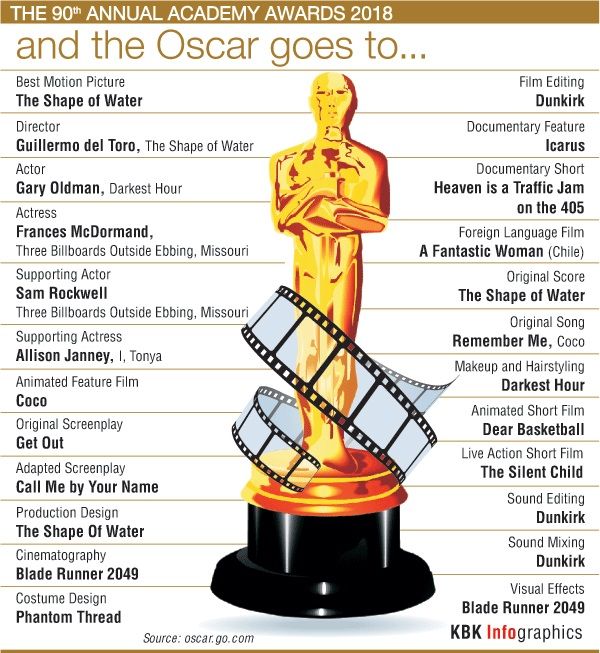 Here is a complete list of who won what:

Best Picture: “The Shape of Water”

Guillermo del Toro’s inter-species fantasy drama The Shape of Water today won the Best Picture Oscar. The lyrical drama about a mute cleaning lady’s unique bond with a humanoid amphibian, who is a classified government secret, led the 90th Academy Awards, with 13 nominations.


"I want to dedicate this, to every young filmmaker, the youth that is showing us how things are done. Really, they are. In every country in the world." - @RealGDT

A huge congratulations to #TheShapeofWater team on their 4 wins at @TheAcademy Awards tonight! #Oscars pic.twitter.com/22frHmiZ2g

With Sally Hawkins and Doug Jones in the lead, the movie had received massive critical acclaim for its unique handling by the director, who has credited his ‘childhood monsters’ for setting him free.

Guillermo del Toro won the Academy Award for the Best Director for "The Shape of Water", a fitting reward for his life-long obsession with monsters and creatures.

Having already won at the Golden Globes, DGA, The Critics Choice and the Bafta Awards, the Mexican director was a clear front-runner in the race that had reputed names such as Christopher Nolan ("Dunkirk"), Jordan Peele ("Get Out"), Greta Gerwig ("Lady Bird") and Paul Thomas Anderson for "Phantom Thread".


Director Guillermo del Toro dedicates his Best Picture Oscar for 'The Shape of Water' to 'every young filmmaker.' "This is a door, kick it open and come in." https://t.co/PR48iXw93O #Oscars pic.twitter.com/Ysa7zsJumA

This is the fourth time a Mexican has taken home the prize in the last five years.

Two decades after winning her first Academy Award for playing Marge Gunderson in "Fargo", a police chief about to give birth, Frances McDormand today took home her second Oscar for her role of Mildred Hayes, a mother grieving the loss of her teenage daughter, in award seasons favourite "Three Billboards Outside Ebbing, Missouri".

In the black comedy drama, McDormand plays Mildred, the disillusioned and angry mother of a young woman whose murder has gone unsolved in her small-town American community.


"If I fall over, pick me up because I've got some things to say."


.@AllisonBJanney jokes after winning Best Supporting Actress: "I did it all by myself." https://t.co/yMMfUJjpSy #Oscars pic.twitter.com/MiOlD9rIYL

Here are the other winners:

Original Screenplay: “Get Out”


Congratulations to @JordanPeele and the @GetOutMovie cast and crew for creating a truly original #Oscars winner. pic.twitter.com/NtyrsjzNte

Adapted Screenplay: “Call Me by Your Name”


Congratulations to the cast & crew #PixarCoco on their Academy Award for Best Animated Feature! #Oscars pic.twitter.com/EmRFd8ccCI

Documentary Short: “Heaven Is a Traffic Jam on the 405”

Score: “The Shape of Water”

Song: “Remember Me” from “Coco”

Production Design: “The Shape of Water”


And the Oscar goes to... pic.twitter.com/N43iPPBFkz