Actress Saba Qamar breaks down while talking about Zainab, makes a powerful appeal for justice

The actress was in tears describing what Zainab must have gone through and delivered some of the most powerful words sure to move you.

By: ABP News Bureau
Updated: 17 Jan 2018 04:35 PM
Islamabad: As Pakistan continues to agitate over the rape and murder of seven-year-old Zainab Ansari in Kasur, Hindi Medium actor Saba Qamar recently broke down during an interview and demanded justice for the little girl.

She was in tears describing what Zainab must have gone through and delivered some of the most powerful words sure to move you.

She said, "My heart simply can’t imagine how she must have suffered in this cold. This can happen to any of you. Why is this happening? Why isn’t anyone stopping this?”

She also lashed out at Pakistan's law and urged women to come forward against any kind of harassment which they face. She said, "If the law is not with us then it’s fine. If we catch the culprit then we will do what we want to. If we have to protect ourselves then why we should follow the law?” 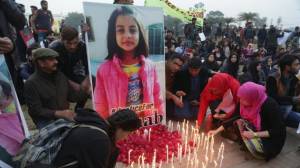 Emotional Saba further added, "This pain that I’m feeling… I feel like she was my sister or my daughter. I don’t feel like she was someone else’s child. I’m just thinking that she was not even my blood kin. And I am in pain. Her parents must be dead.”

"I can only think of three words Kidnap, rape, and murder."

Here's what had happened:

Reportedly, Zainab had gone missing while going to a nearby home for Quranic studies. Her parents had left her in the custody of her aunt as they had gone to Saudi Arabia to perform Umrah (the lesser pilgrimage).

Later her body was found on Tuesday in a garbage bin and the police confirmed she was abducted, raped and murdered. Her murder ignited fury in Kasur, where residents attacked a police station in which two people lost their lives.

With the situation still tense, citizens and celebrities have now come forward to demand justice for Zainab. Saba's emotional appeal has gained a lot of reactions on social media:

Saba Qamar spoke against child abuse ???????? i have no words such things are so heartbreaking. Zainab is not a first case of child abuse...Noor Fatima,laraib and so many children are waiting for the justice...we want quick and fair justice ... #JusticeForAllChildren #ShameOnCMPunjab pic.twitter.com/EoPLHX7AvC

The monstrous act of injustice faced by 7 year old has shocked the whole nation and has enraged them. Just like many individuals Actress Saba Qamar expressed her grief and condemn such horrendous acts against any child. #JusticeForZainab #Justice4Zainabhttps://t.co/82pXhxsIv2

#JusticeForZainab
“How Many Zainab’s Will It Take?”
“Raise Ur Voice 4 Zainab”
“Protect Our Children”
“Protect Our Women”
“Keep Our Women Safe”
“Stand Against Child Abuse”
“Find & Punish These Monsters”
“Failed Government”
“Justice 4 All Children”
Justice Delayed is Justice Denied