He said Americans will pull together to help the suffering and he pledged to continue monitoring the investigation during his lengthy Asian tour.

By: AP
Updated: 06 Nov 2017 08:38 AM
Tokyo:  President Donald Trump says a Texas church shooting that left 26 dead was an "act of evil" and promised his administration's full support to the investigation.

Speaking to U.S. and Japanese business leaders in Tokyo on Monday during his Asian trip, Trump expressed his sorrow over what he called a "horrific shooting" at a "place of sacred worship." 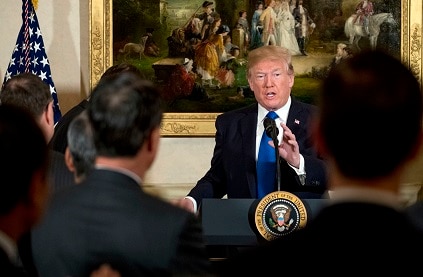 Trump speaks during a meeting with U.S. and Japanese Business Leaders at the U.S. Ambassador's residence(Photo: AP)

Trump said that "our hearts are broken but in dark times — and these are dark times — such as these, Americans do what they do best." He said Americans will pull together to help the suffering and he pledged to continue monitoring the investigation during his lengthy Asian tour.

The attack happened Sunday morning when a man dressed in black tactical-style gear and armed with an assault rifle opened fire inside a church in a small South Texas community, killing 26 people and wounding at least 16 others in what the governor called the deadliest mass shooting in the state's history.

Japan's Prime Minister Shinzo Abe also offered his condolences, saying on Twitter: "I offer my deepest condolences for those who lost their lives in the incident that occurred in the U.S. state of Texas." He added: "My thoughts are with those who suffered injuries in the incident." 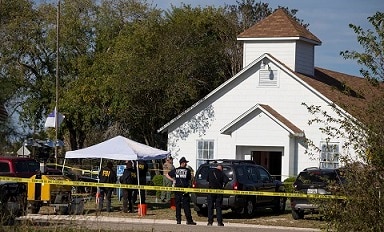 26 people have been reported to bekilled in the shooting (Photo: AP)

The shooting comes just over a month after a gunman opened fire on an outdoor music festival on the Las Vegas Strip from the 32nd floor of a hotel-casino, killing 58 people and wounding more than 500. Trump traveled to Las Vegas several days after to meet with families of victims and first responders.